PHP has several configuration options to limit resources consumed by scripts. By default, PHP is set to allow uploads of files with a size of 2MB or less.

Try increasing the following values in php.ini, for example:

Elements of the Mac OS X desktop and Finder, and their Windows Explorer equivalents

Here is a sample Mac desktop and Finder window (in Cover Flow view mode), labeled so we can compare it to Windows. Some of the following Mac OS X features may not be available in Windows. 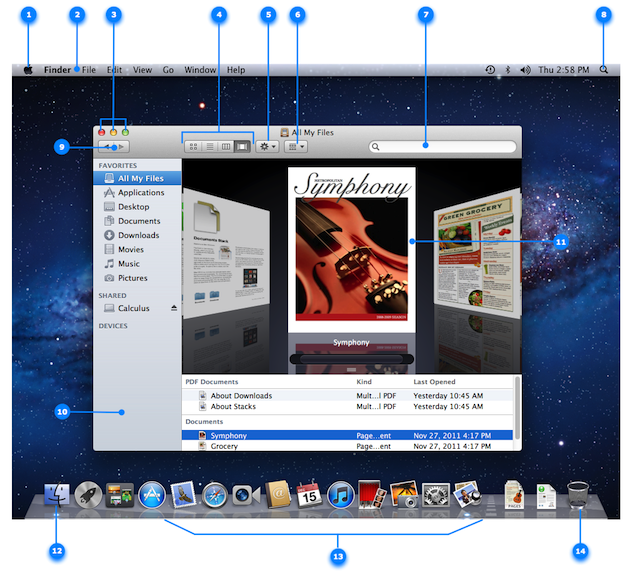 Homebrew is a package manager designed for installing UNIX tools and other open-source applications on Mac OS X. It will quickly download and install them, compiling them from source. Homebrew Cask extends Homebrew with support for installing binary apps — the kind you normally drag to your Applications folder from DMG files.

Install Homebrew and Homebrew Cask
First, you’ll need the command-line tools for Xcode installed. On a modern Mac OS X system, you can install these just by running the following command in a Terminal window. You could also install the full Xcode application from Apple, if you prefer — but that takes up more space on your Mac and isn’t necessary.

Next, install Homebrew. You can just open a Terminal window, copy-paste the following command, and press Enter:

This script informs you what it will do. Press Enter and then provide your password to install it. By default, it installs Homebrew so you can use the brew command without typing the sudo command and providing your password.

Run the following command once you’re done to ensure Homebrew is installed and working properly:

UPDATE: The below command is no longer necessary. Homebrew Cask is now automatically installed as part of Homebrew itself.

Install Graphical Apps With Homebrew Cask
Now you can get started installing those graphical apps you want. This involves some very simple commands. To search for one, use the following command:

To install an app, run the following command. Homebrew Cask will automatically download it, extract the app, and install it to your Applications folder.

To uninstall an app with Homebrew Cask, run the following command:

The Homebrew command is the underlying package manager that installs all those UNIX and open-source utilities you might want. It’s the easiest way to install them on Mac OS X, just as it is on Linux. Like Homebrew Cask, it uses simple commands.

To search for a utility:

To remove that package from your system later:

For more details on using these commands, read the Homebrew Cask Usage guide or the Homebrew brew command manual on their official websites. Not every graphical application or Unix utility you’re looking for will be available, but most of them probably will be.